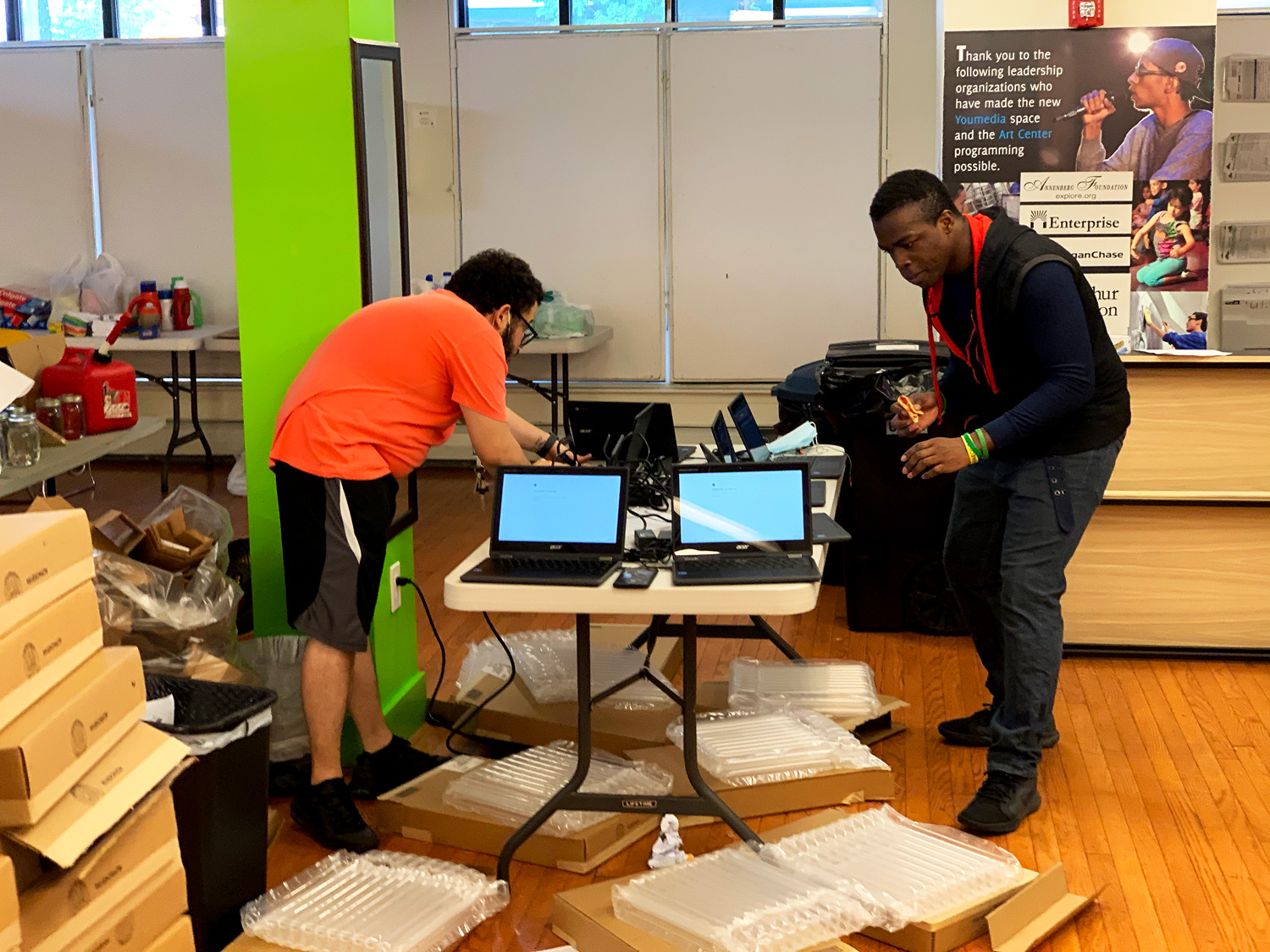 DreamYard staffer Rudy Blanco and volunteer Stanley Dru, also known as Osita, set up and test donated computers and hotspots prior to distribution to area high school students. Volunteers sorted the devices and configured them for specific schools so they could be put to use immediately. (Matt Turner)

Activists and nonprofits team up to press service providers

COVID-19 forced a million city public-school students to attend school via Zoom, illuminating how many Bronx families lacked computers or Wi-Fi—and launching a collaboration of nonprofits to fill the void.

It is sometimes making a choice of ‘Do I pay rent? Do I put food on the table? Do I buy medical services? Or do I get internet service?.

As part of the relief effort, working groups formed around a range of issues: housing/community, equity and justice, education, economic security and health, and digital equity. Nonprofits that sometimes had competed for philanthropic dollars began sharing information and solutions.

At the top of everyone’s list of problems was lack of reliable connectivity—to study, to reach customers, to help social service clients, to help connect with patients and provide legal services.

“It is sometimes making a choice of ‘Do I pay rent? Do I put food on the table? Do I buy medical services? Or do I get internet service?” explained Jason Duchin, co-founder of DreamYard, a Bronx arts and technology nonprofit.

The Bronx Community Relief Effort led to creation of The Bronx Digital Equity Coalition, which aims to provide short- and long-term solutions to the digital divide.

DreamYard and Here to Here, a career prep program for Bronx youth, took the lead in distributing donated laptops and Wi-Fi devices to schools—principals often picked them up in their own cars.

One of the first questions coalition partners had was why the Bronx had been shortchanged by internet service providers.

Desmon Lewis had an easy answer for that: “They prioritized communities that were going to provide better margins for them.” The companies found holes in city franchise agreements requiring coverage in underserved areas, he said.

DreamYard’s Duchin was asked by the foundation to lead the connectivity group that became The Digital Equity Coalition, and to help figure out how to leverage the community’s power to get resources from the telecom and tech companies, as well as from the city and state.

With city franchise agreements opening up, and with city and state internet plans proposing a more “open access” approach, he feels it will be in the interest of the corporate tech giants to work with communities. The city plan sets that as a requirement for any company using city assets to deliver broadband.

Building out reliable service with affordable rates will require a variety of approaches over time, Duchin said—installing mesh networks that connect wirelessly to high-speed cables to fill immediate gaps, bringing in new internet competitors, wiring more buildings and so all apartments have good access, and probably ultimately subsidizing providers to connect all buildings and apartments.

“Any number of our industries are routinely subsidized by the government so that they can keep costs down, bring in money for themselves and the consumer gets what they want,” he said. Figure out a price point the community can handle, he suggested, and then “backfill” with tax breaks and subsidies.

The coalition also wants tech firms seeking to serve the Bronx to work with Bronx-based tech training facilities for low-income students like the Knowledge House and Per Scholas, to create a tech talent pipeline. The CUNY schools—Lehman College and Bronx and Hostos Community Colleges—also are seen as valuable resources for training residents for high-demand tech jobs.

Danny Peralta, executive managing director of THE POINT, envisions one day having locally trained “digital stewards” available for every building or two in The Bronx. “This should be somebody who can come and fix your problem tonight — that’s your neighbor…. You’re not waiting for two weeks for somebody to come and fix your cable.”

What began as a community relief effort during COVID has morphed into a host of Bronx nonprofits and elected leaders working together to address a range of common problems like the digital divide, in conjunction with the efforts of The Bronx Community Foundation.

“We are thinking of the Bronx as a whole—there’s a spirit of trust,” said coalition member Ron Bergmann, chief information officer at Lehman.

With the pandemic and remote learning challenges receding, the Digital Equity Coalition is now working with Community Tech NY and the National Digital Inclusion Alliance to determine next steps. Some goals include making The Bronx’s broadband needs known beyond NYC policymakers, and working with similar groups in other urban areas to share knowledge and strength.

Community Tech NY has worked with groups in Detroit, Red Hook and Kingston, N.Y., and with THE POINT CDC in Hunts Point to improvise community-based internet solutions. The inclusion alliance shares information among similar digital equity efforts across the country and advocates for greater support with policymakers.

Massive funding to address digital disparities nationwide is coming onto the table at the city and federal level, and millions more are pouring in from foundations and private donors. One concern is that decisions on how to spend the money could take place too quickly, in a way that could waste resources and might not be in the best interest of Bronx residents.

Toward that end, the coalition is working with lawyers on a proposal by THE POINT to create a Bronx Internet Trust that would operate like a land trust. Composed of coalition members and community residents, the trust might negotiate costs and services with internet providers who wish to serve the Bronx. The arrangements could also ensure protection of citizen data and develop the borough’s tech training pipeline.

“If it’s done properly, multiple communities will have their own conversations about how this works,” THE POINT’s Peralta explained. Communities might even decide to become their own broadband providers.

Hillary Kolos of DreamYard and a key player in the digital working group, explained the impetus behind the Trust concept.

“There’s a history of people and neighborhoods in the Bronx being taken advantage of or not being included in the conversations. The coalition wants to make sure that as these opportunities come down the line, that the electeds and funders and corporations—anybody who has a new idea for how to fix something in the Bronx—is coming to people in the Bronx and putting resources into what’s already there, rather than trying to come in and fix things.” 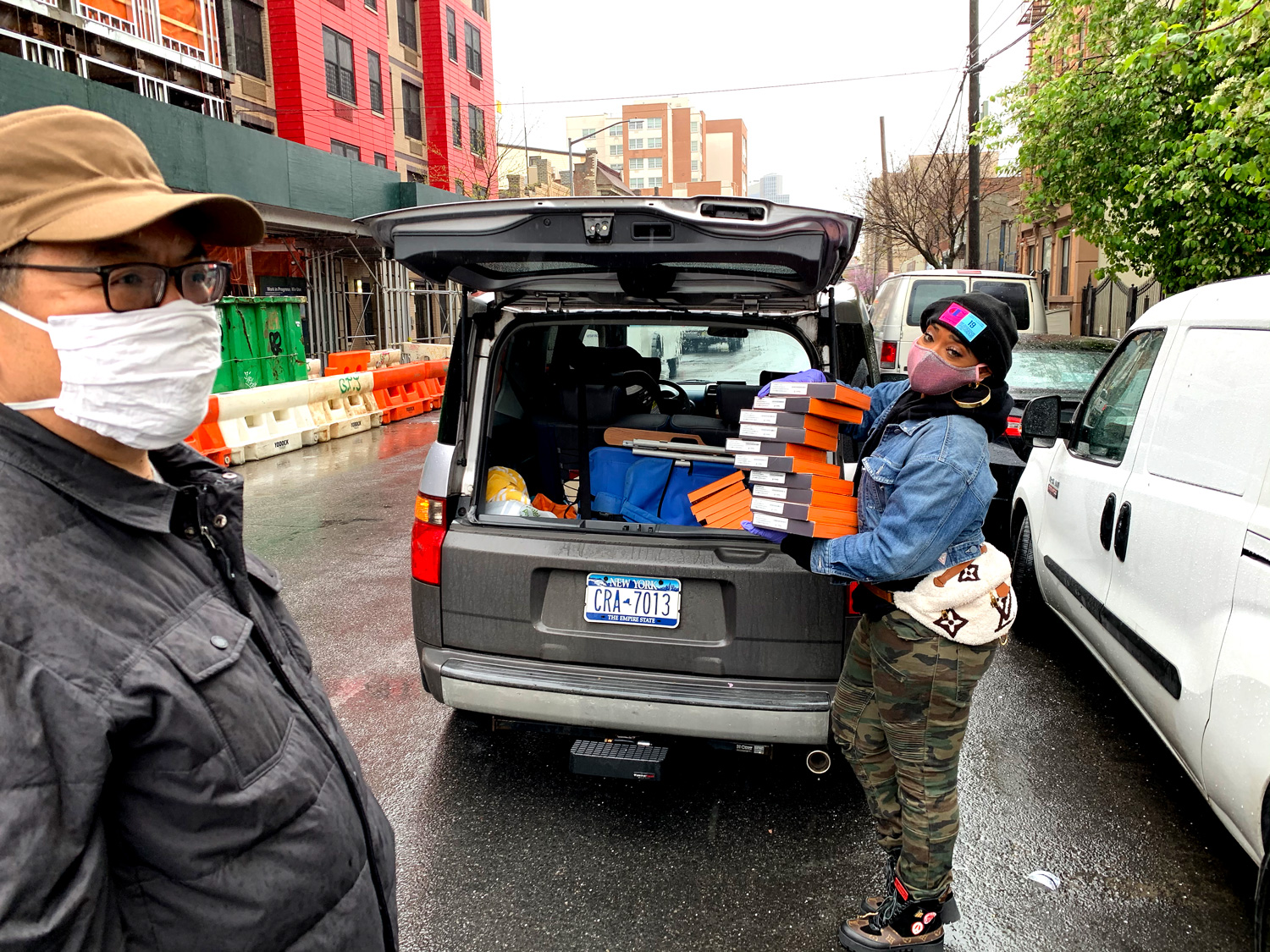 Close to 30 local nonprofits, educational and social service entities and elected officials are part of the Bronx Digital Equity Coalition. Many have provided free services to South Bronx neighbors who need laptops, connectivity, training and other help to get online.

DreamYard, an arts and social justice organization, was a key actor in organizing the Bronx Digital Equity Coalition. It worked with Here to Here and Careerwise New York to provide hundreds of free laptops and Wi-Fi to schools and families early in the pandemic and to distribute food after receiving funds from the Bronx Community Relief Effort. Last fall, DreamYard, collaborated on a “lending library” for computer and Wi-Fi equipment, supplementing efforts by the Department of Education to get more computers into student hands.

THE POINT CDC was the Bronx pioneer in tackling internet connectivity challenges. In addition to providing free broadband to 600 of its neighbors, THE POINT has shared its mesh technology and experience with all coalition members. Its program to train local residents (Digital Stewards) to install and maintain its mesh system has launched tech careers. It has connected the coalition with similar groups in other cities, and it proposed, and is now developing, the parameters of a Bronx Internet Trust that could negotiate costs and services with internet providers wishing to serve the Bronx — or create networks wholly owned and operated by Bronx neighborhoods.

New York Public Library had a Wi-Fi hotspot lending program before the pandemic and loaned hotspots to families with kids in school when COVID hit. When branches closed to visitors, Wi-Fi remained on to provide access to neighbors or passers-by. Computers connected to the internet are now available at all branches starting July 6 and can be reserved or used on a walk-in basis, with assistance. South Bronx branches are: Mott Haven at 321 E. 140th, Melrose at 910 Morris Ave., Hunts Point at 877 Southern Blvd., and Woodstock at 761 E. 160th St. The NYPL is now studying creating a pilot to broadcast internet signals to surrounding neighborhood points via a Citizens Band Radio System technology.

Lehman College, Hostos Community College and Bronx Community College distributed thousands of Chromebooks, iPads and Mi-Fi devices to their students who needed them to connect to classes during the pandemic. Their campuses continue to serve as Wi-Fi connection points to community members and, in the future, might serve as broadband distribution points for their neighborhoods. The colleges provide the coalition with expertise in running large digital networks and are leaders in training local youth as technology specialists to connect and serve the Bronx.

Bronx Documentary Center, a gallery and education space, has internet-connected computers in its library that it makes available to community residents. The library is open by appointment only from Monday through Thursday. To reserve a date and time block, email: [email protected] On Sundays, walk-ins are welcome from 1-5. The entrance is on 151st Street at Courtlandt Ave, buzzer #2.

Per Scholas provides between 12- and 15-week free training programs to prepare people for entry-level careers in technology, including cybersecurity, information technology support, software engineering and more. In 2020, Per Scholas launched a tech support Helpdesk that provides free entry-level tech support to the local community. This may range from issues surrounding printers, networking, internet connection and more. The helpdesk can be reached at: perscholas.org/nyhelpdesk. After completing the form, a Per Scholas alumnus will review your ticket and respond within 24 hours. You can email [email protected] with additional questions.

The Knowledge House offers a nine-month free tech training program followed by a three-month paid internship. It was active in trying to bring the community together even before COVID, having developed the Bronx Digital Pipeline aimed at building an ecosystem of supports for young people in the Bronx to pursue training and careers in tech and also to build up more of a tech industry in the Bronx.

South Bronx Rising Together, a children- and family-focused nonprofit in Community District 3, spearheaded a Tech Equity Day of Action in October 2020 that drew attention to the lack of equipment and connectivity South Bronx students needed for quality remote learning. The group surveyed student needs for online learning and made policy recommendations, held webinars for family child care providers on receiving COVID relief funding, launched a program involving 21 “healing-centered schools” to address the many stresses students and teachers encountered during the pandemic, and started a virtual space and council for parents to connect.

The Bronx Community Foundation, through the Bronx Community Relief Effort, has provided millions of dollars in support of these efforts. While Bronx community groups work to extend access to computers, local broadband networks and training, the federal government has temporarily stepped in to assist low-income families with paying for currently available internet service.

South Bronx households are eligible to receive up to $50 per month discount on broadband service for the duration of the pandemic. Eligibility requirements include having a child attending a Title 1 school, lost employment, a substantial loss of income since February 2020, a student receiving a federal Pell grant, or meeting criteria for a participating internet provider’s low-income or COVID-19 program. More eligibility and application details can be found here.

If you’re looking for a public hotspot in the S. Bronx where you can get connectivity, here’s a map of NYC Wi-Fi hotspots. 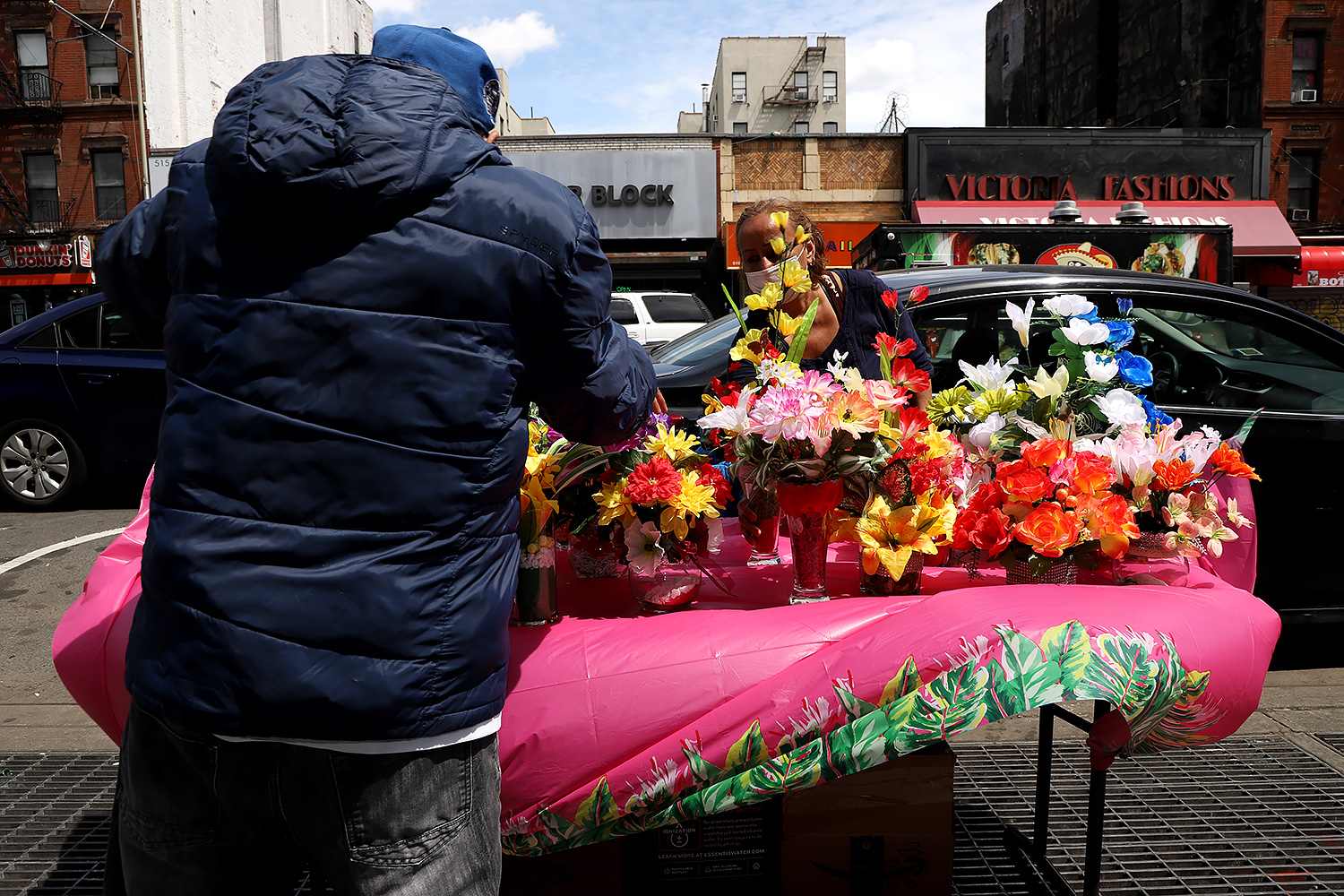 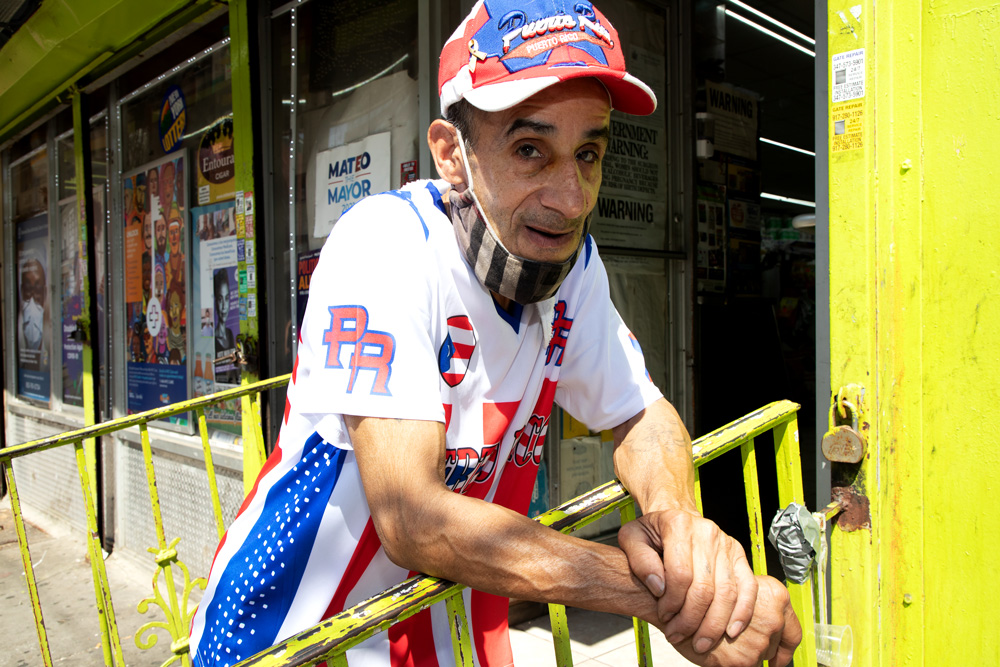